Manufacturers can’t get their hands on materials to make semitrailers, despite high demand from trucking companies 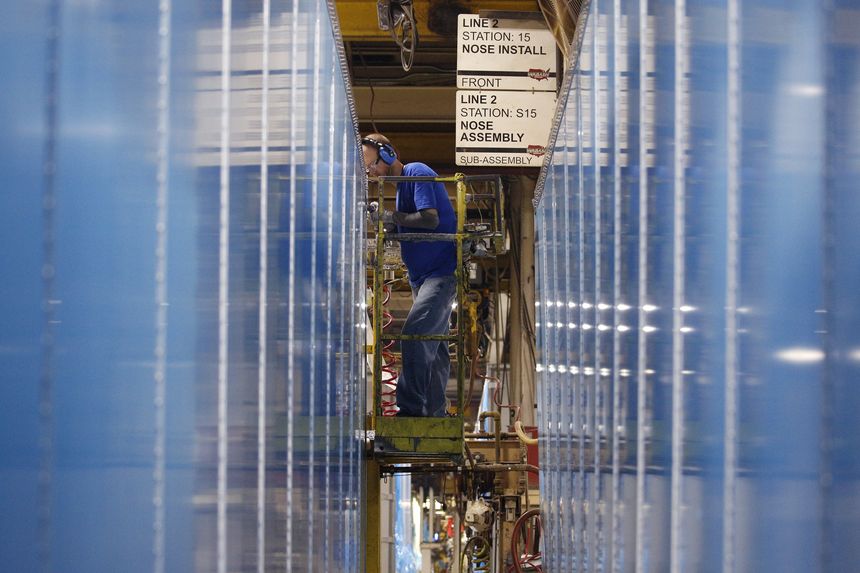 A worker installs rivets on a semitrailer at Wabash National’s manufacturing facility in Lafayette, Ind. Wabash says demand is the highest it has been in the company’s history.

Shortages of parts and labor are crimping production at truck-trailer factories, undercutting trucking companies’ efforts to expand their capacity in a tight freight transport market.

Manufacturers were producing 25% more dry vans—the most common type of semitrailers used to haul goods—in 2019 than they are now, and industry turnaround times for orders now stretch as long as eight months after peaking at 13 months earlier this year, according to transportation data provider ACT Research.

Lafayette, Ind.-based equipment maker Wabash National Corp. expects to produce about 25% fewer trailers this year than it did before the pandemic because of shortages of everything from foam insulation to suspension components and taillight wiring.

Chief Financial Officer Mike Pettit said demand is the highest it has been in the company’s history. Wabash’s backlog of orders for trailers and some other products rose to more than $2.3 billion as of Nov. 30, according to a Wednesday investor presentation. The company is passing along to its customers higher costs for materials such as steel, which Mr. Pettit said quadrupled in price between a low point in August 2020 and the third quarter of 2021.

The factory backups are driving down U.S. trailer orders as transportation equipment manufacturers put a lid on sales because their production slots are filled deep into 2022. The number of October orders plunged about 69% compared with the same month in 2020, when trucking companies were racing to expand capacity as the U.S. economy emerged from pandemic lockdowns, according to ACT. Trucking fleets ordered about 17,400 trailers from U.S. manufacturers in October, down more than 38% from September.

“That’s not because the fleets don’t want to buy trailers or place orders,” said Frank Maly, ACT’s director of commercial vehicle transportation analysis and research. “It’s because the manufacturers at this point are very hesitant to accept additional orders.”

Wabash’s Mr. Pettit said the manufacturer is “being selective” and giving priority to its top customers. “The market dynamics are such that turning down orders is required from every manufacturer, Wabash included,” he wrote in an emailed statement.

The lack of new trailers is slowing the flow of goods and contributing to higher trucking rates for retailers and other shippers, said Don Ake, vice president of commercial vehicles at freight industry research firm FTR. Many older trailers are also idle, Mr. Ake added, because of a lack of replacement parts.

Sauk Centre, Minn.-based Felling Trailers Inc.’s backlog is “four times the size it’s ever been, prior to 2021,” said Pat Jennissen, the company’s vice president of sales and marketing. The maker of flatbed trailers briefly shut down production in July as it awaited delayed materials and now is holding twice as much inventory as it normally would, amassing stock of items such as tires to guard against future shortages.

Bob Wahlin, chief executive of Stoughton Trailers LLC, said labor shortages are curtailing output for the Stoughton, Wis.-based company and for its suppliers, despite efforts to attract workers by raising pay and benefits.

“It seems nobody is able to produce as much as they’d like right now,” Mr. Wahlin said. “They just can’t get the people.”

Equipment makers say the backlogs are frustrating customers trying to refurbish their fleets. The trailer shortfall comes as shortages of semiconductors and other parts are curtailing production of heavy-duty trucks.