Imports at the nation’s congested container ports are expected to remain at near-record levels for the remainder of the year as retailers rush to move merchandise from docks to shelves in time to meet the expectations of holiday shoppers, according to the monthly Global Port Tracker report released today by the National Retail Federation and Hackett Associates. 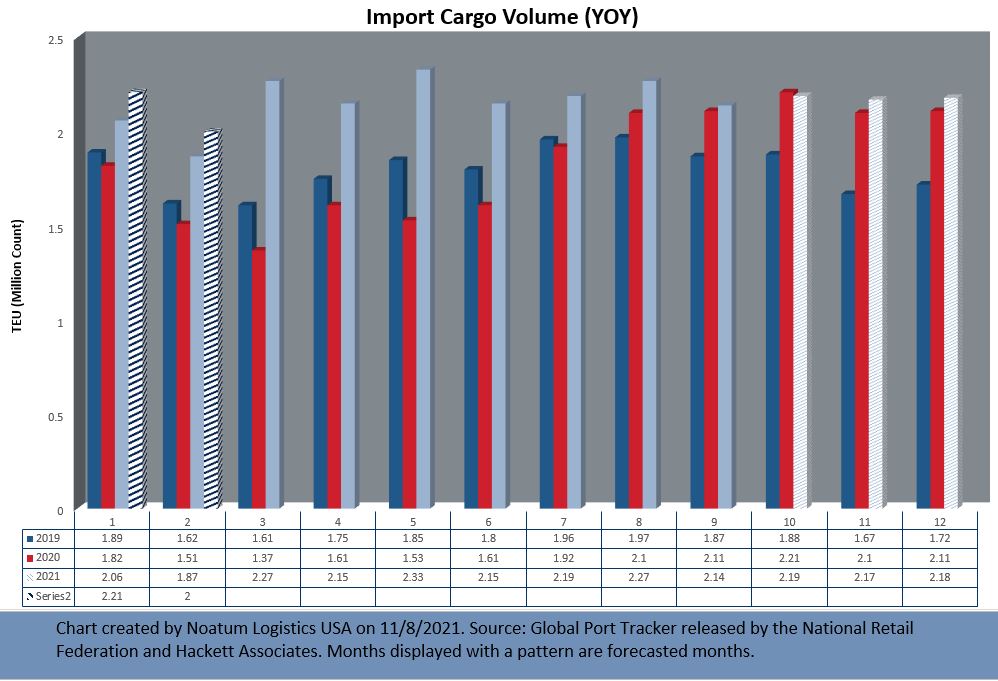 “Dockworkers are unloading ships as fast as they can, but the challenge is to move the containers out of the ports to make room for the next ship,” NRF Vice President for Supply Chain and Customs Policy Jonathan Gold said. “We need better empty return procedures and more chassis, truck drivers, rail capacity and warehouse workers to keep the system moving. Retailers have enough inventory on hand to make sure shoppers won’t go home empty-handed this holiday season. But there are still items sitting on the docks or waiting on ships that need to make it to store shelves and online sellers’ warehouses. Retailers want to make sure customers have product choices.”

More than 70 ships were reported waiting to dock at the Ports of Los Angeles and Long Beach last week, and the wait at Los Angeles has averaged two weeks over the past month. Those delays, in turn, can push back the vessels’ arrival at other ports on their schedules. Some carriers have announced plans to divert to other locations, but congestion is building nationwide.

“The once-vaunted supply chain continues to come under pressure from all sides,” Hackett Associates Founder Ben Hackett said, citing issues ranging from port congestion in the United States to electrical shortages impacting production in China. “It does not look like the congestion will improve any time soon, with most commentators suggesting problems will continue well into 2022 – and that is assuming COVID-19 does not spike again.”

Congestion and disruptions that began in 2020 have continued through the current “peak season” for shipping when retailers normally stock up for the holidays, but many retailers anticipated the challenge and began bringing in holiday goods months ahead of schedule to be sure sufficient inventory would be available. NRF has forecast that holiday sales will grow between 8.5 percent and 10.5 percent over 2020.

U.S. ports covered by Global Port Tracker handled 2.14 million Twenty-Foot Equivalent Units in September, the latest month for which final numbers are available. That was down 5.9 percent from August but up 1.4 percent year over year. A TEU is one 20-foot container or its equivalent.

Ports have not reported October numbers yet, but Global Port Tracker projected the month at 2.19 million TEU, down 1.2 percent from October 2020. The year-over-year decline would be the first since July 2020, after which unusually high import volumes began to arrive when stores closed by the pandemic reopened and retailers worked to meet pent-up consumer demand and to stock up for the holidays.